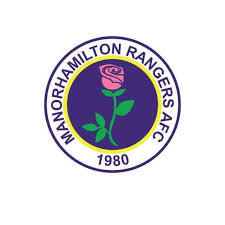 Our senior squad travel to leitrim tomorrow with an 11am start against manor rangers.

Manorhamilton rangers had a great season last year pushing carbury all the way for the league title. They also had a comprehensive victory over carton in the glasshouse league cup final. They will be pushing hard again this season.

Manor will be short a few players tomorrow like the hoops due to gaa commitments. Like ourselves they gave a good youth system and will have their usual mix of experience and youth. Their front three are always dangerous in seamus Ryder, paddy woulfe and last seasons top scorer Robbie cunningham. Our defence will have to be in top form to keep those three out.

We have a new management team in place with janes Hannigan and Marc Ryan taking the mantle. The lads have assembled a good squad this season and have worked hard pre season.

Fergal o hara was in great form at the end of the season and will be a key figure on Sunday. Fergal also welcomed a new baby girl to his family in the last few days. Everyone at the club extends their congratulations to the O Hara family.

Ben spellman and Jimmy monaghan were highlighted in the Sligo champion review this week and that combination was outstanding at the end of the season. They will be key to the hoops success.

A strong squad has been named for tomorrow’s game with some new young talent coming through.

A number of players will not join the squad till next week due to gaa commitments including Barry O Mahoney, Leo Doherty and Conor Mcdonagh. In addition tomorrow we will be without niall McDermott, Ryan McEnroe and Conor gray. Ryan and Conor will be cleared for their transfer home on Monday from the LSL.

The lads will be hoping to build on last seasons fine finish to the season.

Last year we defeated Manor Rangers 3-2 in manorhamilton after being two goals down. In and end of season game we lost 4-2 with a young side including four debutants.

Unfortunately no supporters are allowed tomorrow.

Manor rangers are streaming the game on their Facebook page for those who want to watch.