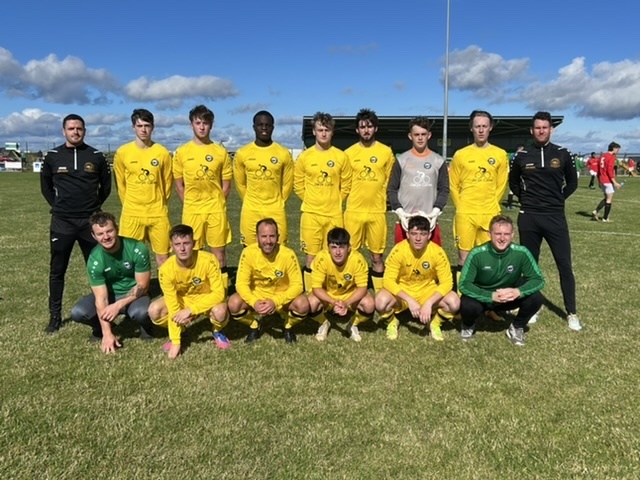 an understremgth hoops side went down heavily to MCR on a beautiful sunny morning in Strandhill on Sunday. unfortunately due to holidays, work and GAA commitments we were left with a tight but strong squad for Sundays game. After a barnstorming finish to last season where we defeated all the top teams and reached the Connacht cup quarter final we entered the new season full of hope for success.

the first half was evenly balanced with the hoops having the two best chances. Niall mc Dermott went close nipping in ahead of the MCR keeper while Danny gray went on a great run firing narrowly wide. MCR took the lead right on half time when Adam cunningham powered home a free header at the back post.

The second half was end to end with limited chances in the early stages but MCR grabbed a second from a set piece with cunningham again the goal scorer. We pulled one back with a brilliant caoilte Bannigan free kick Into the top corner.

Unfortunately we conceded a third goal not long after to leave a two goal gap as MCR piled on the pressure. Charlie coopers mazy run earned the hoops a penalty which saw a brilliant save from the MCR keeper. A late fourth goal Sealed the MCR victory and a deserved three points.

We go again next Sunday away to manorHamilton rangers on Sunday morning. With players returning the lads will be looking to bounce back.

Man of the match was Jamie Walshe on his competitive senior debut.

Club sponsor Sligo Park Hotel were our hosts for the late...

Welcome to the first ever Strand Celtic FC Halloween Cam...

Sympathies go out to all in Creeslough

All associated with Strand Celtic wish to extend their de...

Our Club 50th Anniversary Dinner is fast approaching at t...

As we embark on another season, it’s timely to ask all pa...